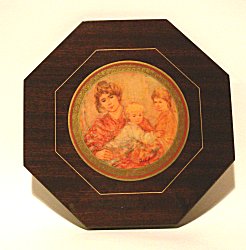 Born Edna Hibel, 1917 - 2014, was raised and educated in the Boston Area. An inspiring lady, was one of America's most loved artists. Known for her sentimental paintings of children, she was widely acclaimed as a contemporary artist who had innumerable exhibitions at major museums and galleries in the U.S.A., England, Austria, Monaco, Brazil, Germany, Switzerland, Belgium, Israel, Sweden, Norway, China, Russia, Costa Rica and Japan.
Her gentle but penetrating messages of peace, love and the inalienable dignity of humanity won her a devoted following that still number in the many thousands.

Also available is a musical melody written for Edna Hibel entitled "Hands" created by Reuge.
Browse downward to see all. Click on images for further information