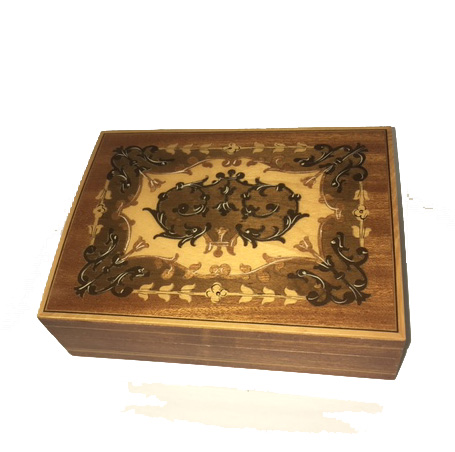 This handsome vintage Reuge musical box with intricate almost Baroque design plays, "Return to Sorrento." It was probably meant for cigarettes as there is no lining.  Previously owned but doubt it was ever used. It's in its original condition with a Sankyo 18 note mechanism. Nice Collectors Item! It measures, 6" x 4 1/2" and stands 2 1/8" high.

According to Wikipedia,  "Torna a Surriento"  is a Neapolitan song composed in 1902 by Italian musician Ernesto De Curtis to words by his brother, the poet and painter Giambattista De Curtis. The song was copyrighted officially in 1905, and has become one of the most popular songs of this traditional genre.

Frank Sinatra, Elvis Presley and Luciano Pavarotti among others sang this beautiful song.