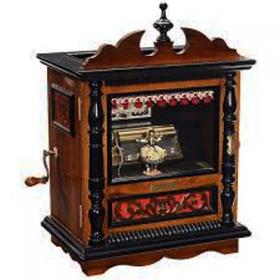 The Railway Station Musical Box by Reuge, a beautiful music box that is an exact replica of the coin-operated railway station music boxes that were found in every Swiss railroad station at the turn of the century.

Entertainment begins when a coin is dropped in its slot. An exquisite 18th century, little French lady Ballerina in a blue costume, dances while the music plays. Our offering is previously owned but was cared for with much love and respect. It is in mint condition.

The cabinets were all handcrafted from burled walnut in traditional Victorian style and measure 13.25" x 8.75" x 18.75." This one's 72 note mechanism plays, "The Anniversary Song" "Tales from Vienna Woods " and "Vienna Life." We believe it to be about circa 1991. It's a grand piece that will delight all who behold it!