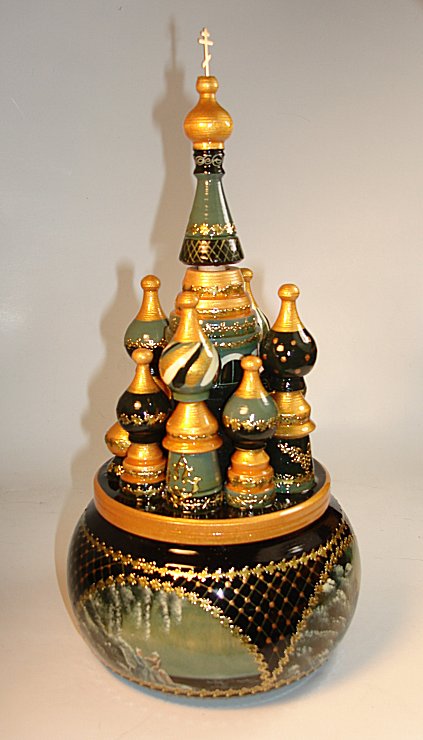 Measuring 5" in diameter and 9 3/4" high, this is a hand painted and artist signed revolving musical wooden replica of the famous St. Basil's Cathedral in Moscow. This particular piece is the most beautiful we've ever had. It has intricate scenes all around its base, depicting scenes of the opera "Eugene Onegin" with beautiful spires in amazing hues of greens. Imported from Russia. It plays "Moscow Nights"

St Basel's was commissioned by Ivan the Terrible and built on the edge of Red Square between 1555 and 1561.
Legend has it that on completion of the church the Tsar ordered the architect, Postnik Yakovlev, to be blinded to prevent him from ever creating anything to rival its beauty again. (He did in fact go on to build another cathedral in Vladimir despite his ocular impediment!) The cathedral was built to commemorate Ivan the Terrible's successful military campaign against the Tartar Mongols in 1552 in the besieged city of Kazan. Victory came on the feast day of the Intercession of the Virgin, so the Tsar chose to name his new church the Cathedral of the Intercession of the Virgin on the Moat, after the moat that ran beside the Kremlin. The church was given the nickname "St. Basil's" after the "holy fool" Basil the Blessed (1468-1552), who was hugely popular at that time with the Muscovites masses and even with Ivan the Terrible himself. St. Basil's was built on the site of the earlier Trinity Cathedral, which at one point gave its name to the neighboring square.