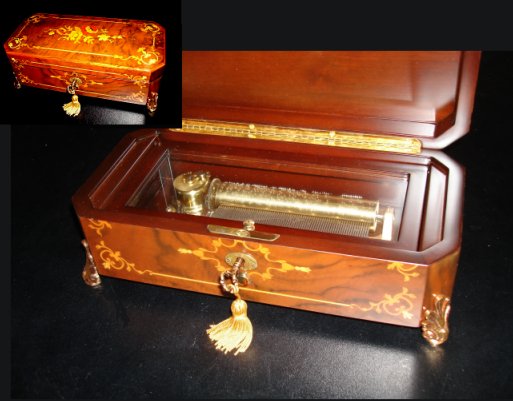 This highly detailed cabinet, housing its 3.72 mechanism, has been sold but Good News! We have another in excellent condition. The only difference is the music, the red tassel on it's key and the lock's escutcheon. It is playing the commemorative "Guido's Valse." This particular cabinet has been retired and its music is rare and collectible. It was a rather limited edition in memory of Guido Reuge.

History has it that by 1930, a dynasty dedicated to mechanical music was confirmed and guided by Guido (Son of Albert Reuge (1886) and grandson of Charles Reuge 1865) for more than sixty years. He was the driving force behind the business. Intuitive, innovative and pioneering, he built the old historic factory in Sainte-Croix (in 1930) and acquired several competing companies, bringing real added-value to Reuge.

The new Reuge "state of the Art" home is only a few years old and is just a short distance down the road. Thanks to his vision, energy and artistry, he restored credibility to the vocation of music makers.

You won't find a more beautiful cabinet than this Reuge 3.73 note musical cabinet. It features exquisite Floral marquetry on its lid and marquetry on all four sides. It's raised on four beautiful ornate brass feet and even the key for it's lock is special. This is new old stock and the only reason we still have it, is because it was some how overlooked and never offered on our website.

The sound is brilliant and yet centered.  The perfect gift for a family heirloom. It will delight and bring smiles whenever and to whomever plays it.