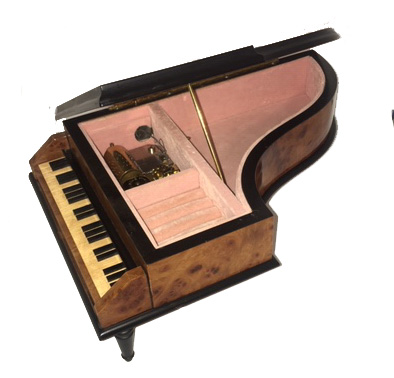 Masterful marquetry (circa 1986) by Arte Intarsio of Italy adorns the lid of this 12" long burl wood piano. It measures 8" side to side and stands 4.75" high. It boasts a raised keyboard which is made of clear elm or ash wood which gives the feeling of the older instruments of Renaissance times.
It's playing "Jesu Joy of Man's Desiring, which is the most familiar English title of Cantata #147. It was composed by Johann Sebastian Bach in 1723.  According to Wikipedia, "the piece was derived from a chorale setting of the cantata Herz und Mund und Tat und Leben. "

This is a very special piece and in very nice condition for it's age. Its pink velvet is surprisingly clean and If it had not suffered a tiny accident to its left front corner it would have a price tag closer to 1200.00. Most of the 3 mm damage is on the bottom of the piano and the very corner now seems to be rounded rather than square it could be nicely restored if so inclined but it is hardly noticeable as evident in the attached image.