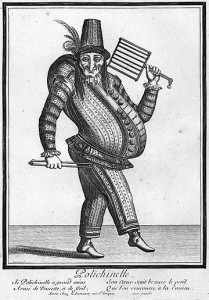 Having trouble composing a new tune?

Domenico Scarlatti’s “Cat Fugue” was composed after his cat trod upon his keyboard.

The cat’s name was Pulcinella, most likely inspired by the classical character well known in Neopolitan Puppetry that originated with the Commedia dell”arte in the 17th century.

A later version of a similar character is commemorated by Koji Murai in an animated music box available at http://www.musichouseshop.com/store/btm60302.html